Providence Cancer Center is proud to be one of the first cancer centers in Alaska to become certified in the use of the Optune, Tumor Treating Fields, device for glioblastoma. In conjunction with Alaska Neurosurgical Associates, Coastal Neurosurgery, Katmai Oncology, and the Alaska CyberKnife Center, we are proud to bring this exciting new technology to our Alaskan brain tumor patients.

Glioblastoma is one of the, if not the most, deadly of cancers. Historically, this disease had a survival of less than four to five months, with surgery alone. The addition of radiation therapy only increased the survival to about eight to ten months. Very few patients lived even 18 months. The first major recent advance was the addition of the oral chemotherapy Temodar almost 15 years ago. With this drug, combined with modern radiation treatments, average survival increased to approximately 14 months, and two-year survival increased to 20%. This was greater than any results previously seen. However, this result was still poor.

Recently, a new and truly exciting treatment has markedly improved survival in patients with Glioblastoma: Optune. As published in the Journal of the American Medical Association, this device has produced a significant incremental increase in survival with extremely low side effects. In this landmark study of modern radiation therapy and Temodar plus Optune, the two-year survival increased to 48% and five-year survival to 20%. These are better than any previously reported results and came from a large randomized trail. This is a great benefit to our patients.

Approximately half of the people who have used Optune with TMZ were alive at two years or longer, compared to 32% who were on TMZ alone. 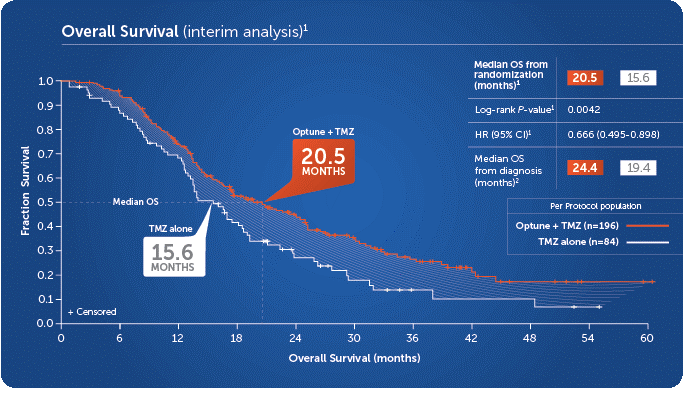 Importantly, patients experienced very few side effects and patients’ quality of life, cognitive function, and ability to perform activities of daily living did not significantly decline with use of Optune + TMZ. The most commons side effect was skin irritation from contact with the system.

The device applies alternating low voltage electric fields across the brain. This interrupts cell division which is common in Glioblastoma cells but very rare in normal brain tissue. It not only slows tumor growth, but also kills some cancer cells, resulting in increased survival.